Lost in translation or not, the PAS vice-president's bid for Putrajaya is seen as a suicide mission given the track record of incumbent Datuk Seri Tengku Adnan Mansor.

Dato' Husam Musa looked rather lost in Putrajaya and he admitted that he was still feeling his way around the administrative capital.

The tall and lanky PAS vice-president, the party's candidate for the prestigious Putrajaya seat, held his first ceramah on Thursday night at the house of a PAS supporter who had offered the premises for Husam to use as his base during the election campaign.

He had earlier given a tazkirah to some Muslim orphans in the area.

The Kelantan - born Husam is a long way from home. He has been eyeing the Putrajaya seat for some time now, and his wish has finally been granted.

The odd thing is that he is also said to be slotted for a state seat in Salor, Kelantan.

The logistics of campaigning in two seats so far away from each other, and so different in terms of issues and priorities, are mind-boggling, what more, if he should actually win both seats.

Kelantan politicians are already making jokes about this. 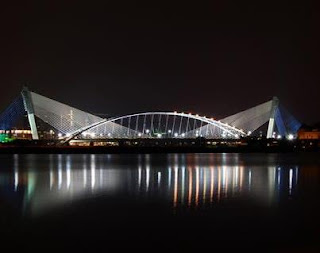 They say Husam will need to take the inter-state high-speed train that PKR's Rafizi Ramli boasted he would build in order to serve dual constituencies.

If that does not materialise, he would have to set up dual households and everyone knows what that means.

But jokes aside, Husam's venture into Putrajaya should not be taken lightly.

Incumbent Datuk Seri Tengku Adnan Mansor has the upper hand and the track record. The Umno secretary-general knows the constituency like the back of his hand.

He has taken good care of it and is the favourite to win.

Husam, on the other hand, does not even know his way around the administrative capital and is only now getting familiar with the local issues.

He is a “parachute candidate” in every sense of the word.

But he is the most high-profile figure the Opposition has ever put there. He is a national figure, he was an MP before becoming an assemblyman and state exco member in Kelantan.

And, he is trusted by party supremo Datuk Nik Aziz Nik Mat.

At his first Putrajaya press conference, Husam pressed the right button by talking about the high rentals for business premises there, contributing to the high cost of living in the capital. He also did not dodge questions about a sex video allegedly involving a top PAS leader.

Yesterday, he went to the Putra Mosque for Friday prayers and stayed back to perform the sembahyang sunat or additional prayers. When he emerged from the place of worship, a youngish crowd was waiting to say “hello” and have their pictures taken with him.

They were both curious and excited to see this man whom they had heard so much about.

However, Putrajaya has seen a 140% increase in voters and it will be an interesting seat to watch.

Husam's supporters claim the PAS candidate has a good chance based on all the positive remarks posted on Harakahdaily and a pro-Pakatan Rakyat news portal. It is hardly the most objective way to assess his chances; moreover, the commenters are not Putrajaya voters.

They claim there are some 1,700 Kelantanese in Putrajaya who will be inclined to support Husam.

Putrajaya has a young profile; 60% of the voters are below 40 years old and Husam is banking on the youth's sentiments.

But the bulk of voters work for the government and there is no denying that Barisan Nasional has taken good care of its civil servants.

“They are acquainted with government policies; they know what the government has done for them such as the scheme to provide housing for civil servants at discounted prices. I think they will vote for us again,” says Datuk Khairun Aseh, who is Putrajaya Umno Youth public complaints chairman.

Moreover, Putrajaya is 94% Malay and Malay opinion does not favour PAS' partnership with DAP nor its flip-flop reactions over the kalimah Allah issue.

Officially, Husam's bid for Putra-jaya is to signal Pakatan Rakyat's seriousness about taking over the federal government.

But over in Kelantan, he is seen as “running away”.

His strained ties with the Kelantan palace is an open secret. As a result, he is no longer seen as the man to take over the Mentri Besar's post after Nik Aziz goes off.

The sluggish development in Kelantan after 23 years of PAS rule also does not reflect well on him, given his reputation as the “economic brains” behind the state government. Talk is that he will not be made a state exco member even if he wins the Salor seat.

Kelantan PAS sources said Husam was offered the Kubang Krian parliamentary seat where he would be the shoo-in winner.

But he preferred Putrajaya, leading some to see him as a publicity-seeker or gila glamour.

Husam's candidature ought to be viewed as part of the shock-and-awe tactics that Pakatan is using to capture the voters attention in the GE13.

He will not be able to create the kind of ripples that Lim Kit Siang has brought to Johor, but he will, undoubtedly, get the attention of Putrajaya voters.

The Umno side is selling the story that he is seeking a dignified exit from Kelantan politics but many think Husam is on a suicide mission.
Posted by tengku azri at 4/13/2013 12:55:00 pm