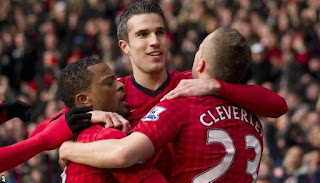 Initially billed as the van Persie vs Suarez game, the match started with nice & warm surrounding. Every players handshake their opponents' hands without exception. Man Utd seemed to efficiently rotate their squad - Valencia and Young in the wing, Ferdinand and Vidic finally paired together again in the central midfield after three months plus. Liverpool's first X1 looked quite impressive albeit the appearance of (the unknown player for me), Wisdom & Sturridge who was surprisingly started from bench.

Man Utd set the pace of the game with more ball possession. The awaited goal comes in the 19th minute. This goal was very beautifully crafted. Sharp passing from Evra reached van Persie who quickly volleyed the ball past Reina.

Suarez are kept at bay, occasionally overpowered by Evra.

Young got injured and being substituted by Valencia after the break.

The second United goal came in the second half from van Persie's free kick, which reached poorly marked Evra. His header brushed-off Vidic and beat Reina.

Three minutes later, Liverpool reduced the deficit after de Gea failed to clear shot from Gerrard and Sturridge quickly slot the ball in.

Then Liverpool started to play livelier but United managed to hold the lead besides some poor finishing from Liverpool players.

It is double figures gap for United until an 10-man City beat 10-man Arsenal later on.

Suarez did not playing his usual today and this big clash looked a bit dull and boring.

One positive thing is no card was shown in the normal time first half.of this fixtures, which is quite rare.

United will be boosted in confidence before playing FA Cup third round replay with West Ham and facing Tottenham in the Sunday's lunch time BPL fixture. Again, this is the second successive time Man Utd play Spurs after playing Liverpool in EPL.

This defeat will give Liverpool manager Brendan Rodgers three successive 1-2 defeats against Man Utd since he took over the Kop in June 2012.